In 1985 I moved from Wisconsin and back to Dallas Texas. While here I upgraded my call to a 5 area call N5ITO and went from Technician to a General class. Several years after moving back to Dallas I was married and moved into an apartment. So much for Ham radio. All radio equipment was sold and Ham radio was out of my life for a while. Through the years I picked up several 2 meter rigs and stayed active that way. But never had the space of radio for HF. Then I lived in a house with a real back yard. Dec 1st, 2002 while browsing eBay I saw a FT-101EX on the list of items. Then it hit me. I can have a real antenna again. Walking out in the backyard to scope out the trees and obstructions I figured a 75 mtr antenna wasn’t a problem. Off to bidding. The radio wasn’t in the best of shape but it would get me on the air. For $175 I was now the proud owner of the radio like the one of my past. Another Yaesu FT-101EX. The radio had some rust spots on the case and top, and the plastic was gone from the face. But it was a radio and affordable at the time/ One problem. The radio didn’t have a mic. Off to the list again. Picked up a Astatic D-104 for $25.00, found a Autek Research WM 1 SWR/Power meter, also a Dentron 160-10 AT Transmatch, and I was set. Just had to wait for UPS to start showing up at the door. As the boxes showed up, I stung a 75 meter di-pole off a tree outside the window 12-13 feet up. Not very high but I was on the air again. Also showing up was the Matching Yaesu SP-101 Speaker, and a SP-101PB Phone patch, then the YO-100 Monitor scope. I was hooked. The table became two small for the radio equipment as it started showing up as I looked for matching components to the radio. My dream back when I was young was to have the complete line for the FT-101 lined up on the desk just like in the photo for the FT-101 Series brochure.

I ordered a service manual for the FT-101EX to do some alignments as I was sure it was a little out of tune after all these years and wanted to get it back to square one. The finals (6JS6C’s) seemed a little weak, and it just needed some work to be made right. After a few emails with the gentleman I ordered the book from, I became aware he had several pieces for the FT-101 line in his possession for sale. This being the FTV-250 & FTV-650 2 and 6 meter Transverters, FL-2100B Linear Amplifier, and the YC-601 Digital Display. All in mint condition. The FTV-250 and 650 were still in the original boxes NOS. The FL-2100B was used, but also near mint. It had the ALC cable plugged in the back was the only reason I call it used, besides that it looked mint. Same for the YC-601. He also had a nice FT-101EE sitting in the pile that was near mint. Worked perfect and still had the plastic cover on the face. The FT-101EX I had now wouldn’t look as nice in the middle of all this mint looking gear, soooo I added the FT-101EE to the pile. In the mean time I already had a FV-101 Remote VFO, and YP-150 Dummy Load/Watt Meter coming in. Within 3 weeks I had fulfilled my dream of 20 years ago. I had the complete line up for the FT-101. The complete set up takes up an area of about 8 feet lined up on a 10 foot table in the 10×8 foot room I call the radio and computer room. 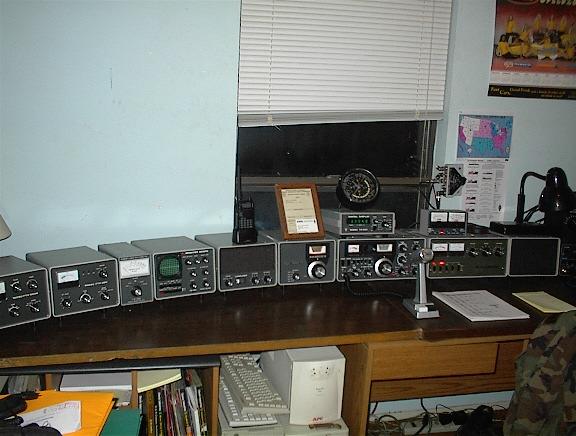 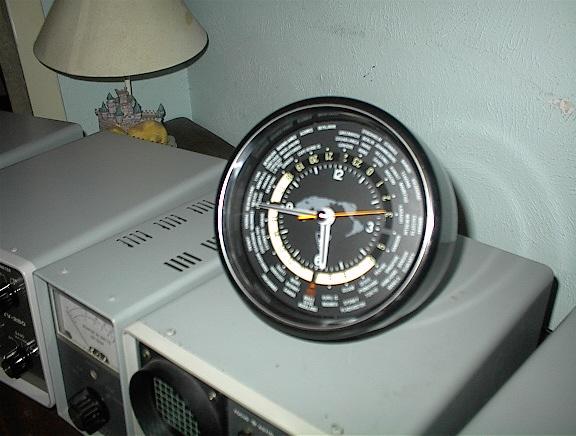 May 2003
The first set of pictures is of the 30 foot tower at the start. Mounted at the time of the pictures is a Cushcraft DX-120 20 element collinear array for 144 mhz SSB. To the right side of the cross boom is a Cushcraft 215WB 15 element yagi for FM simplex work and long range repeater work vertical. Mounted up the center on a 10 foot mast is a Ringo Ranger II also for FM. Off to the left of this tower you can see the taller 60 foot tower going up as work progresses on this tower. More on this tower down the page. 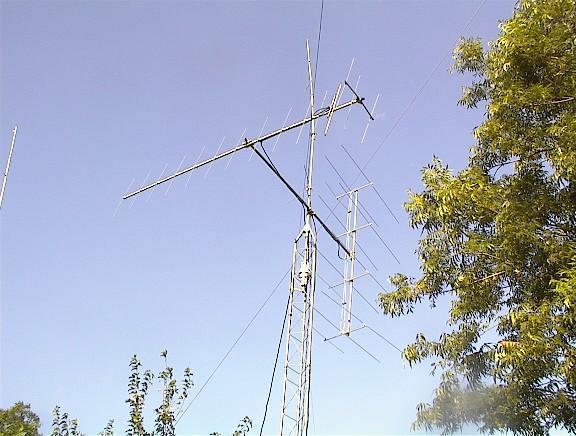 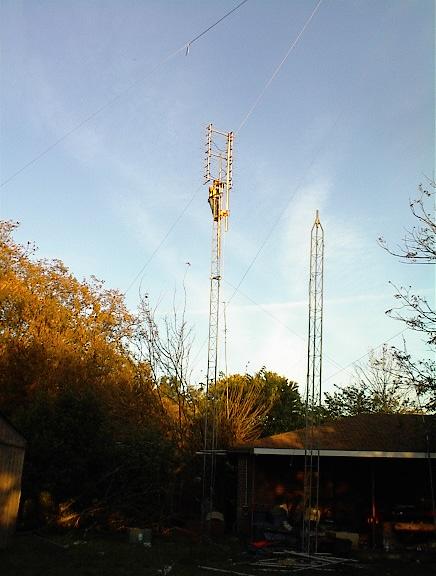 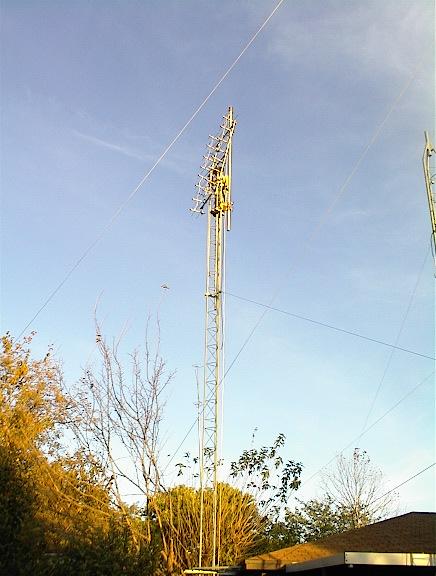 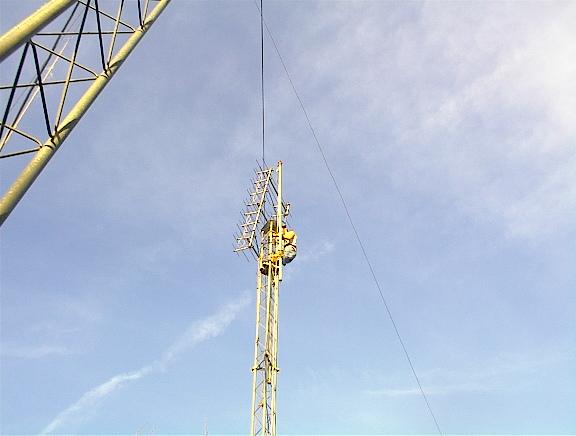 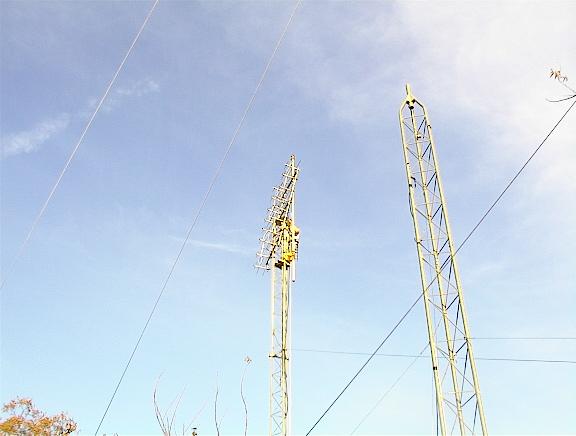 Images above are of the new 40 foot tower going up to replace the 30 foot a few feet away from it. This tower will have a trust bearing plate on the top and a rotor shelf unlike the 30 foot tower which is on a flimsy tilt over base. It’s also sitting in concrete base for a more stable base and a VERY heavy duty house bracket at 12 feet. The bracket is fastened with 5 X 1/2″ lag bolts to the side of the house. It’s at 30 feet now. I have another 10 feet to stack on top, you can see the gin pole still mounted now, the bearing shelf and thrust bearing will be here Tue I hope via UPS. 10 more feet will put me 10 feet above the small tree to the left, soon to be cut down, and the bearing plate adds 18″ on top of that. I have another 18 foot 2″ mast for this tower also. Also you can see the 80 element collinear array made out of 4 Cushcraft DX-420 beams. This is also going on the new tower. Barely visible is the DX-120 2 meter array I used for awhile at first. I now have 3 of these and looking for a 4th to build a 128 ele array for EME work I hope. Anyone have one ?

The North tower ( 40 foot) has been erected and has everything ready to have antennas mounted. Thanks to Chris ( 16 years old) who spent about an hour on top of the tower connecting the DX-420 Array. This is an 80 ele collinear. It’s being feed with 7/8″ Hard line right down the tower to the shack. At most 65-70 feet. I have no amp for this band yet. The rotor still needs to be mounted and the mast raised up more in place. But it’s being held in place no pointing north till this can be done. This tower still has to be fitted with the 5 ele 10 meter beam and maybe a few other smaller antennas. Things change around here all the time.

Below are images of the 60 foot tower before reaching the 60 foot level. It’s present height is 40 feet in the images. The two sections on the ground are the last two sections to be installed once I find a body not afraid of heights. Guy wire brackets were installed at the 30 and 50 foot height. You can also see the Ameritron RCS-8V remote switch box mounted that will be used to switch between the various antennas at the tower once done.

Aug 2003 or so… Below are image of the 60 foot tower in it a state of being completed. No antennas on the top. But you can see the 75 and 40 mtr Double bazooka antennas hanging off the side of the tower. It took me 5 months to get the tower this far. Getting the shakes at 40 feet kind of held up things. I want to that thank those who took my challenge and climbed the tower for me at times to add sections and what ever else needed to be done above 40 feet. She now sets at 60 feet and standing proud.

Below are various images I found of my old tower mentioned above. Some changes all the time but you get an idea of where I came from and started years ago. 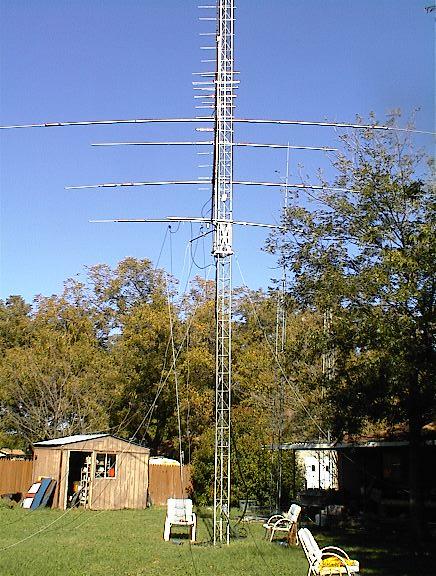 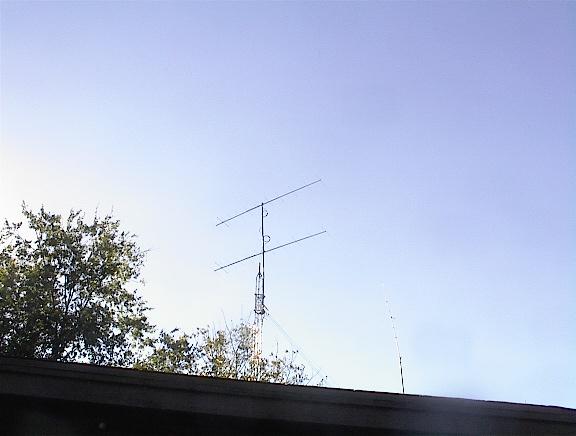 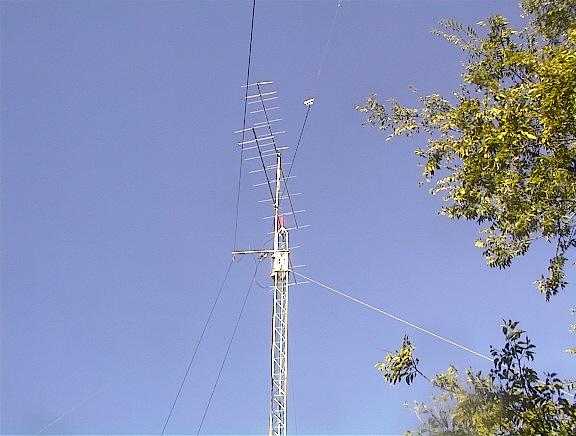 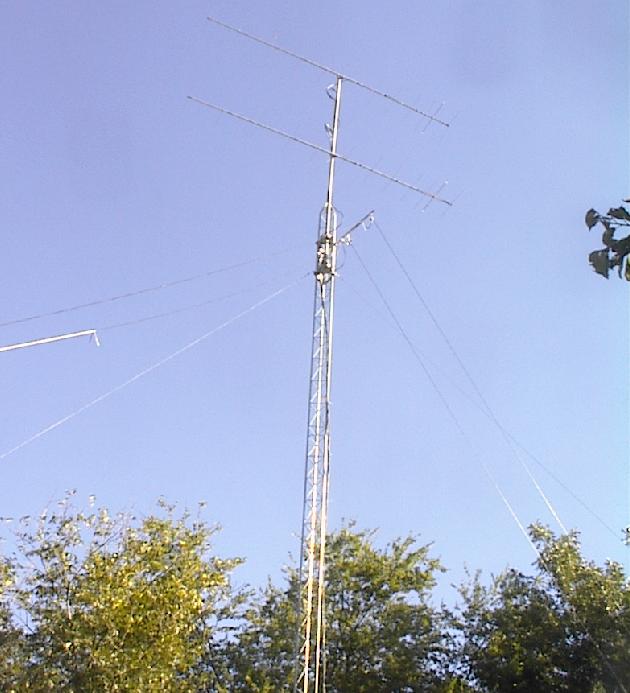 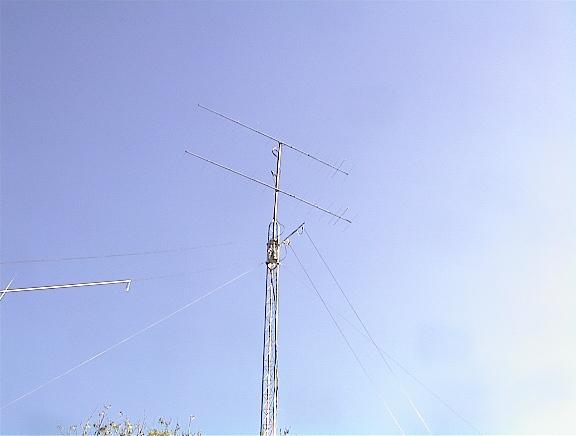 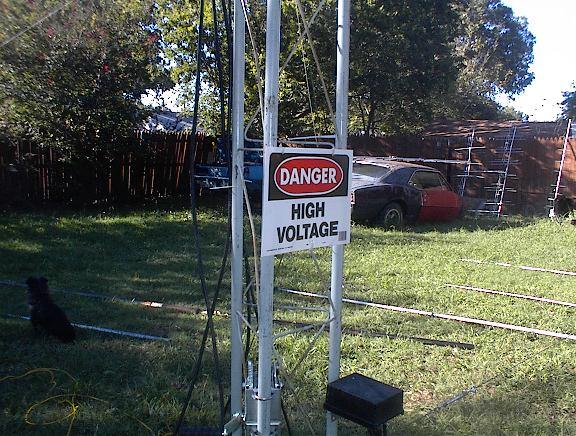 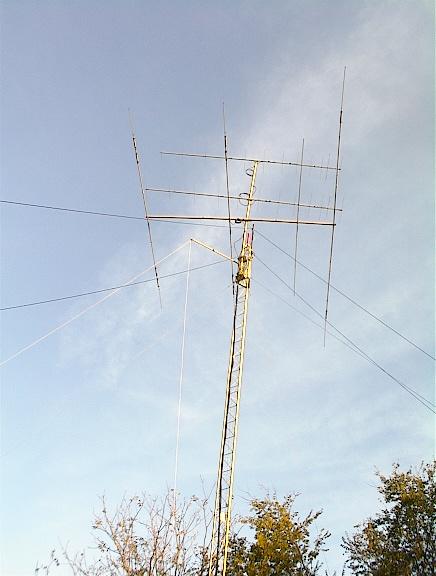 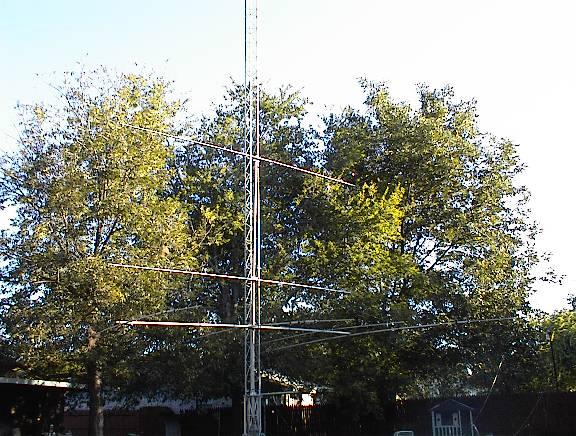 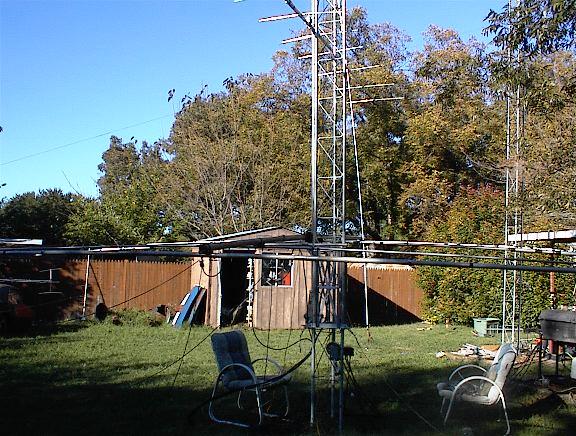 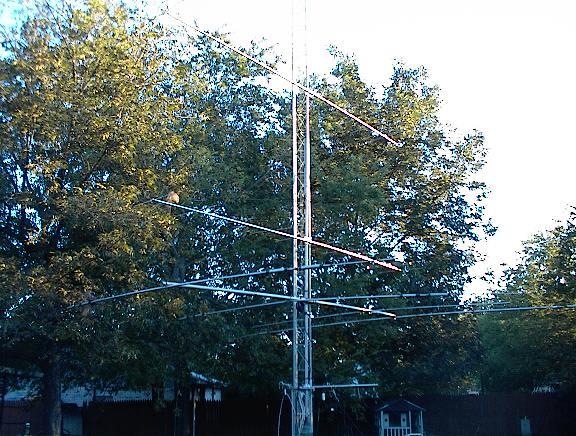 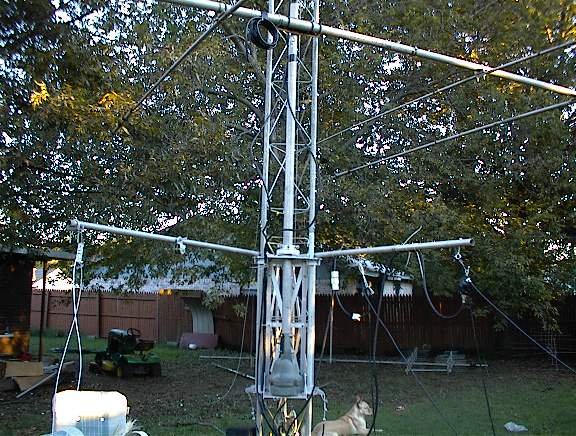 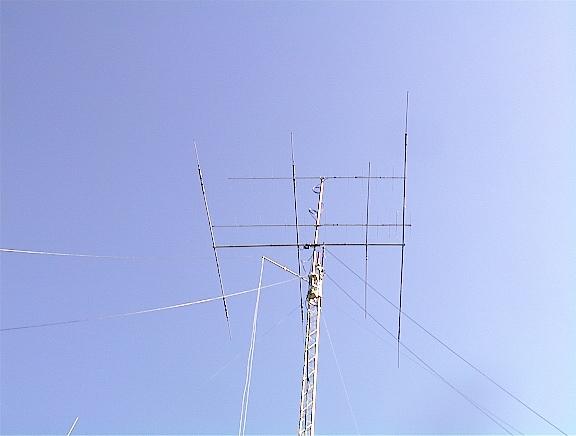 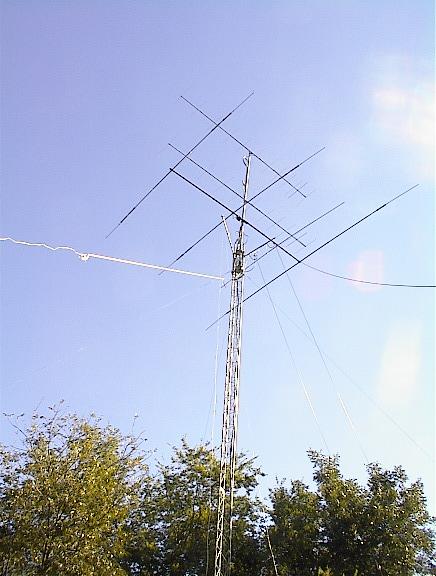 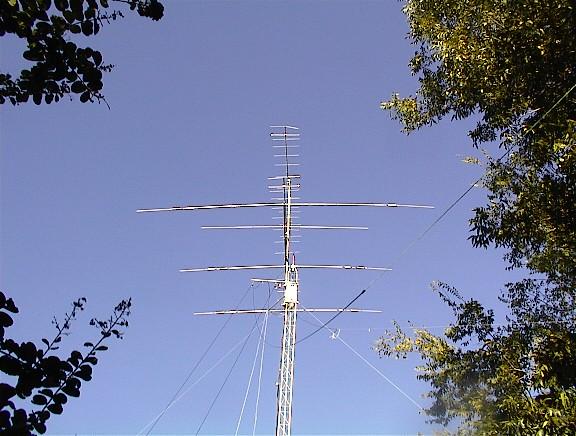 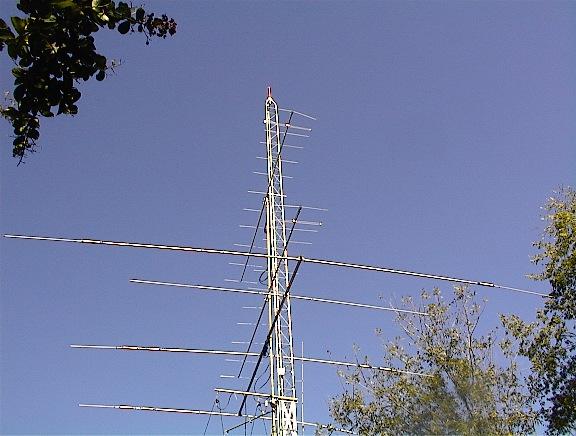 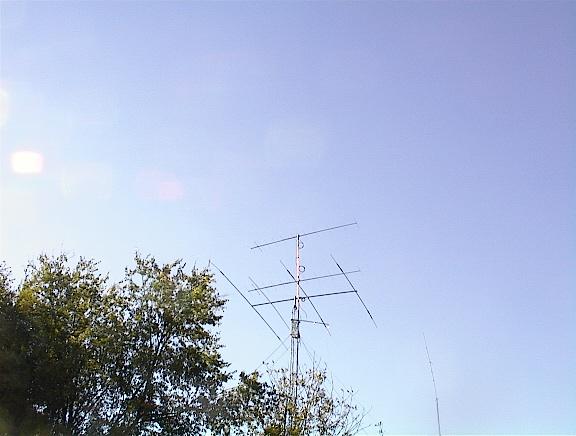